What is the PCL?

The posterior cruciate ligament (PCL) is the largest and strongest ligament in the knee. It has two very distinct portions: one that goes from the back of the shinbone (tibia) to the roof of the femoral notch (in the thigh bone)  called the anterolateral bundle, and a second smaller portion that goes to the side of the notch called the posteromedial bundle. Both bundles prevent the knee from slipping backward, especially when it is bent. However, as they have different attachments, they have different primary functions. The anterolateral bundle prevents excessive front-to-back motion of the shin bone (tibia) while the posteromedial bundle prevents excessive rotation of the tibia. Because they have different functions, it is necessary to reconstruct both bundles when the PCL is torn. 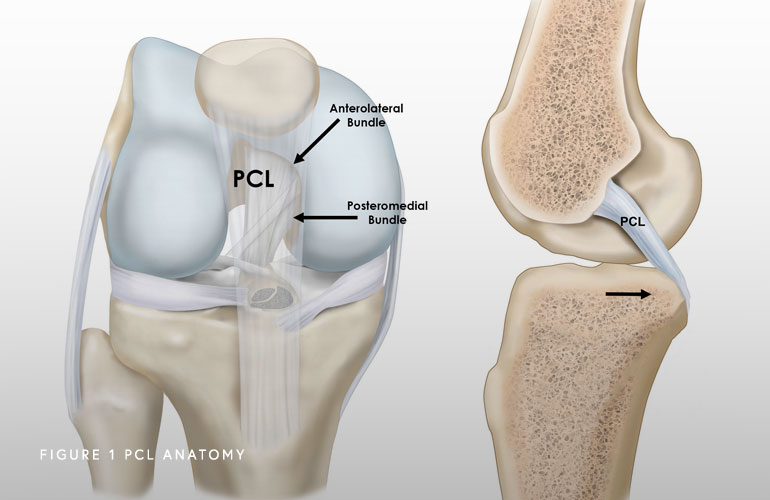 What are the meniscofemoral ligaments?

The meniscofemoral ligaments are small ligaments that cans sometimes be found in the knee joint. They attach to the lateral meniscus and they follow a similar course alongside the PCL to attach to the femur. One of meniscofemoral ligaments attaches in the front of the posterior cruciate ligament (Ligament of Humphrey’s) and one in the back (Ligament of Wrisberg). The anterior one is present in 30% of patients and the posterior one is found in 60% of knees. Both ligaments help the posterior cruciate ligament and prevent the knee from slipping backwards. 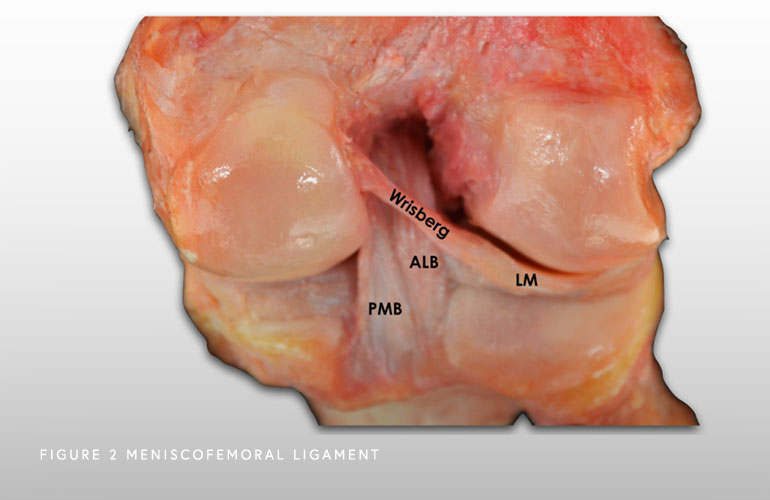 How do PCL injuries occur?

Given the posterior cruciate ligament’s size and strength, it takes a significantly traumatic injury to tear it. Consequently, most torn PCL’s occur combined with other ligament injuries. A PCL tear by itself, called an isolated PCL tear, is not that common and is instead usually associated with other ligamentous injuries (MCL, LCL or ACL). Most isolated PCL tears occur as a result of an injury to the front of the knee when it is bent. Falling on a bent knee while playing sports, slipping on ice, or hitting a dashboard during a traffic accident are some common ways that the PCL is torn. 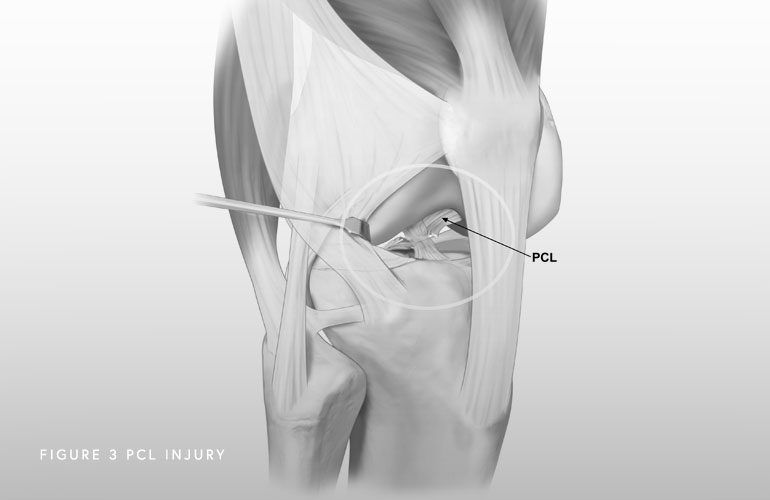 How common are PCL injuries?

A recent epidemiologic study reported that the incidence of isolated torn PCL’s is 2 per 100,000 in the general population, with more injuries in male subjects. However, Incidence of combined PCL injuries is much higher.

What are the symptoms of PCL tears?

Patients can present with swelling, discomfort, and pain, typically when the knee is bent. When combined injuries are diagnosed, severe instability can be present. In these cases, arteries or nerves can be compromised and therefore it is important to rule these injuries out.

What are the specific tests for PCL injuries?

The integrity of the posterior cruciate ligament can be tested using several clinical tests including the posterior drawer, posterior sag, quadriceps active tests, and the supine internal rotation (IR) tests.

Do PCL injuries of the knee heal on their own?

What is the most accurate way to diagnose a posterolateral corner injury?

A combination of a detailed history, comprehensive physical examination, special x-rays, and MRI (magnetic resonance imaging) are key for a successful diagnosis. One special test that we do to determine the severity of your pathology are kneeling stress x-rays. These special x-rays allows us to objectively quantify and diagnose (based on validated systems) a partial, complete, or combined PCL injury with millimeter accuracy. Additionally, stress x-rays allow for an objective comparison from before and after the surgery to track the results of the procedure. 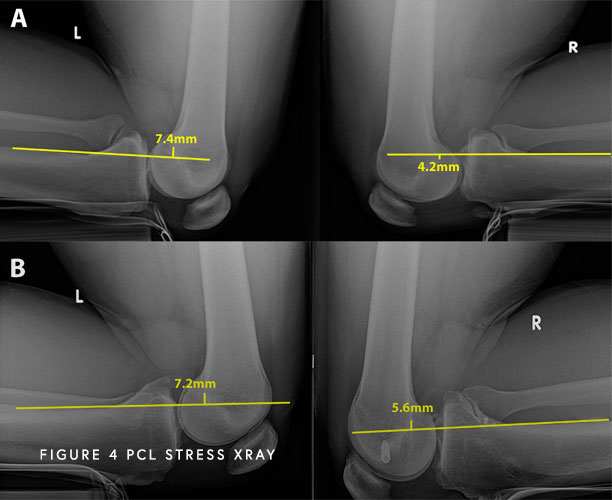 What is the treatment for a PCL injury?

If the patient only has a posterior cruciate ligament injury, a conservative treatment can be attempted for partial tears (grade I and II). The conservative approach involves rest, ice, Tylenol (acetaminophen), physical therapy, and a brace. Physical therapy for a posterior cruciate ligament injury is somewhat more restrictive than for an ACL injury (as higher degrees of flexion (bending) can stress the PCL) and are focused on quadriceps muscle activation while avoiding hamstring activation. Too much activity from the hamstrings will pull the tibia (shin bone) backwards which can stretch the healing of the posterior cruciate ligament. For this reason, a brace is usually needed. It is important for you to understand the reason for wearing a brace, because they are usually much bigger and, unfortunately, more uncomfortable than other knee braces.

For patients with combined ligamentous injury,  chronic cases, or those that remain symptomatic despite the conservative treatment, surgery is recommended. posterior cruciate ligament surgery is similar to ACL surgery in that it involves drilling tunnels into your shin and thigh bones (tibia and femur) and fixing a graft into those tunnels. However, because the posterior cruciate ligament is bigger it typically requires two grafts to truly replicate the anatomy and biomechanics. Achilles tendon allografts and hamstring tendon auto- and allografts are most often used. Substantial evidence suggests that the double bundle technique (two grafts) is superior in terms of knee function and stability. However, the technique is more difficult. With this in mind, be sure to have a conversation with your surgeon regarding their preference and rationale. 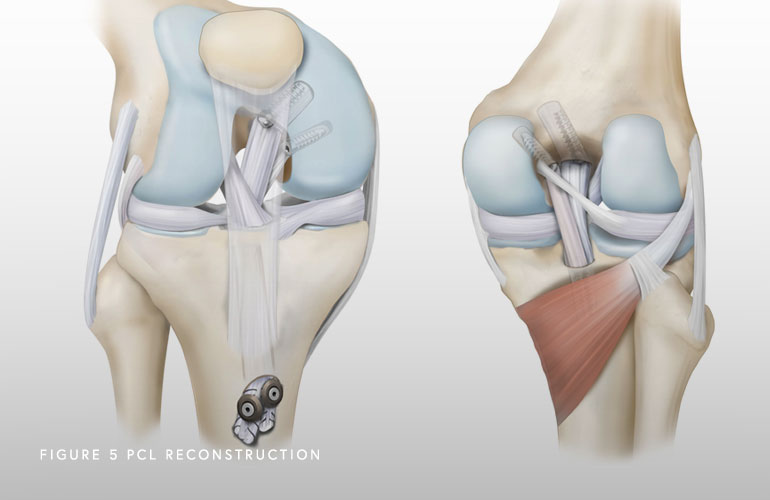 What are the outcomes of PCL injuries?

Outcomes for surgery are variable depending on technique and surgeon. For PCL tears, given their relative rarity, you should find a surgeon who is experienced with these injuries in order to optimize your chance at success, because it is not an easy or common procedure. We have recently published a study looking at 100 patients that underwent a PCL reconstruction demonstrating excellent outcomes with restoration of the knee kinematics (similar movement and stability to the healthy knee) with a minimum follow up of 2 years.

Can I return to sport after a PCL Injury?

Depending on the severity of the injury and associated injuries most PCL reconstructions can return to sport at 9 to 12 months.

How long is the recovery?

Depending on the severity of the injury and other associated ligament injuries, recovery can be between 6 to 12 months. Physical therapy starts on day 1 to work on range of motion. Patients should not bear weight (or very little weight) for the first six weeks after injury or surgery. After this initial period, they may wean off of crutches when they can walk without a limp. Patients can usually return to driving two to three weeks after they are able to walk. Endurance and strengthening can be started in the second phase of rehabilitation. Agility exercises start at 4 months along with the running progression if previous stages have been successfully completed. Although return to sports is different between patients, it should be allowed at approximately 9 to 12 months.