Blood has four main components: red blood cells, white blood cells, platelets, and plasma. Platelets are tiny blood cells that are mainly in charge of blood clotting; they transport over 1,500 proteins responsible for stimulating the proliferation of new cells and collagen (one of the main components of cartilage) and suppressing inflammation and cell death. Plasma is the fluid that carries all the other blood cells. PRP injections aim to deliver a large number of platelets to injured tissues in the hope that they can help an injury heal better and faster.

Platelets play a fundamental role in healing because they are a natural source of growth factors (proteins), which are stored in small bags within the platelets called α-granules. Growth factors are involved in the important stages of tissue healing and regenerative processes. They tell your body to send the proteins needed for regeneration. 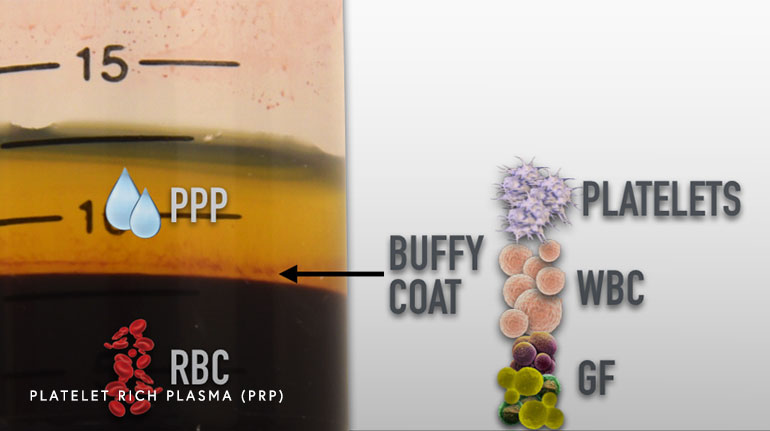 How is PRP made?

PRP injections are made from your own blood, which is collected and then centrifuged at varying speeds until it separates into layers. Different types of blood cells have different weights. If blood is treated to prevent clotting and permitted to stand in a container, the red blood cells, which weigh more than the other components, will settle to the bottom; the plasma (liquid) will stay on top; and the WBCs and platelets will remain suspended between the plasma and the RBCs.

To accelerate and refine this process, a PRP machine is typically used to centrifuge the blood. This is carried out to exclude RBCs from the injection solution, as these are detrimental for the joints. Furthermore, recent research has found that too many white cells are also disadvantageous to the joint because they cause more inflammation. Therefore, platelets and plasma (which also has numerous growth factors) constitute the most beneficial parts of the blood when treating a joint. The whole centrifuge process takes approximately twelve minutes and produces a platelet concentration of three to five times that of original plasma. (The number of platelets needed is not well understood, nor which growth factors are more favorable to produce the desired effects.) Immediately prior to the injection, a platelet activator may be added to initiate the clotting process, producing a platelet gel.

What are the outcomes after a PRP injection?

Leukocyte-poor (low white blood cell) PRP has been shown in multiple clinical trials to be more effective than placebo, steroid, and gel injections for the treatment of mild to moderate osteoarthritis symptoms. As with other biological injections, multiple studies have concluded that better results can be achieved in early versus advanced osteoarthritis. When compared to corticosteroid injections for advanced knee osteoarthritis, the magnitude of improvements tend to be greater in the PRP group.

Regarding the number of injections needed, recent literature has shown that a minimum of two injections was more successful in treating the symptoms than a single shot for patients with early osteoarthritis. For patients with advanced osteoarthritis, multiple injections did not significantly improve the results of patients. Researchers from Europe have suggested that the average duration of symptom relief after an injection is nine months and that yearly injections could be beneficial to maintain the effects in a consistent manner. Nevertheless, although multiple studies have shown PRP to improve symptoms, no cartilage healing has been demonstrated in any studies.

A combination of a PRP injection with an HA gel injection may have an even more powerful effect, by enhancing the potential of both injections to attract your own body-healing proteins. Furthermore, some studies reported that the combination of HA and PRP could inhibit inflammatory symptoms even more. A recent clinical trial comparing PRP alone, HA alone, and both in combination demonstrated that combining HA and PRP resulted in a significant decrease in pain and functional limitation when compared to HA alone when patients were evaluated one year after  the treatment, and significantly increased physical function at one and three months when compared to PRP alone.

Most of the possible adverse effects associated with PRP injections are not specific to PRP but to every biological injection. They include pain, stiffness, fainting, dizziness, headache, nausea, gastritis, sweating, and rapid heart rate, which usually resolve within days. Risk of infection is a concern as with any injection that penetrates the joint. PRP preparations that have higher concentrations of white cells are more prone to result in inflammatory reactions.