When multiple knee ligaments require reconstruction, there is a possibility of the tunnels drilled for each graft crossing paths (tunnel convergence). Through use of 3D knee models, the risk of tunnel convergence for anterior cruciate ligament (ACL), posterior cruciate ligament (PCL), fibular collateral ligament (FCL), popliteus tendon (PLT), superficial medial collateral ligament (sMCL), and posterior oblique ligament (POL) reconstructions were calculated. The tunnels for ACL and PCL reconstructions were held constant throughout the experiment while tunnel placement for the remaining ligaments varied.

When performing multiple ligament reconstructions, tunnels drilled for FCL and PLT grafts should be aimed 35° to the front of the knee to avoid convergence with the ACL graft tunnel. On the other side of the knee, convergence with the PCL graft tunnel can be avoided by aiming the sMCL and POL tunnels higher and more towards the front of the knee – specifically, the sMCL tunnel should be aimed 40° higher and towards the front and the POL tunnel 20° in these directions. An important finding of this study is that the intercondylar notch of the femur may be disrupted when the tunnel is drilled along a neutral (0°) axis, which may contribute to graft failure. 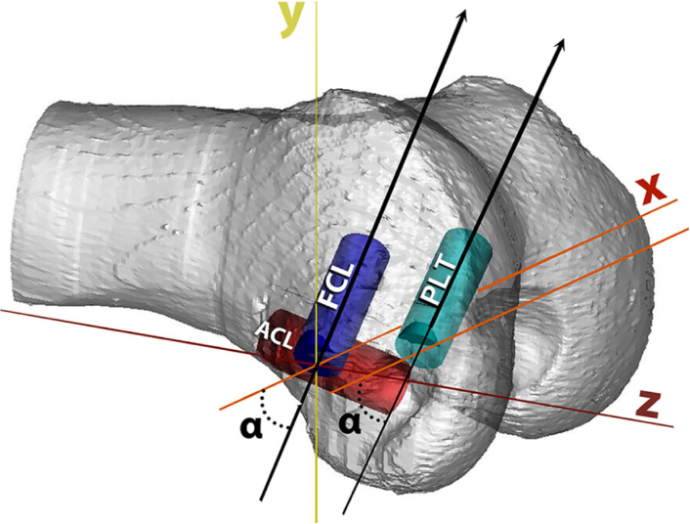 Figure 2. To avoid convergence with the anterior cruciate ligament (ACL) tunnel, the fibular collateral ligament (FCL) tunnel should be aimed 35° anteriorly (with the patient in the supine position, the surgeon’s hand should be dropped and the reamer aimed up). The popliteus tendon (PLT) tunnel is shown parallel to the FCL tunnel. α is the angle anteriorly from the horizontal plane (x-axis) = 35°.