The Influence of Graft Tensioning Sequence on Tibiofemoral Orientation During Bicruciate and Posterolateral Corner Knee Ligament Reconstruction: A Biomechanical Study

When multiple ligaments are reconstructed during knee surgery, the order of tensioning each graft can affect alignment of the tibia and femur. If the resulting alignment varies from what naturally occurs, issues such as instability and graft failure may arise. This study evaluated whether the order of tensioning anterior cruciate ligament (ACL), posterior cruciate ligament (PCL), and posterolateral corner (PLC) grafts affected the final orientation of the tibia in relation to the femur through use of cadaveric knees. Regardless of the graft tensioning order, natural alignment of the knee could not be restored – the tibia was consistently found to slide forward in relation to the femur. In addition, when the PLC graft was tensioned first, the tibia rotated internally as the knee straightened. When the ACL graft was tensioned first, the tibia tended to slide backwards with a straighter knee. These findings are important because much of the load felt by the knee during walking and other activities occurs when the knee is mostly straight. Based on these results, this study recommends tensioning the PCL graft first, followed by the ACL graft, to avoid backwards movement of the tibia during knee extension and internal rotation. 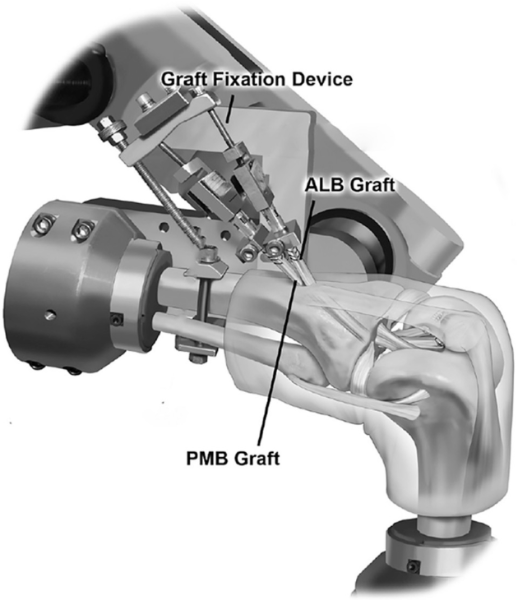 Figure 1. An illustration of the robotic setup for biomechanical testing. All grafts were fixed in a custom-made fixture. In this illustration, only the double-bundle posterior cruciate ligament (PCL) grafts are shown to demonstrate the setup. Showing all the grafts would make it difficult to understand because of the overlap. ALB, anterolateral bundle; PMB, posteromedial bundle