Patients with multiligament knee injuries, which are injuries to several of the ligaments on the inside and/or outside of the knee, represent a subset of patients who require careful planning before surgery due to the complexity of the procedure. Commonly, patients who present with ligament knee injuries have associated injuries to the meniscus, the shock absorber between the thigh and shin bone of the knee joint. Damage to the critical attachments of the meniscus, known as the meniscal root, result in deficits in range of motion and can be large sources of pain for patients. If these meniscal root injuries are not surgically fixed, there can be rapid acceleration of arthritis of the knee. 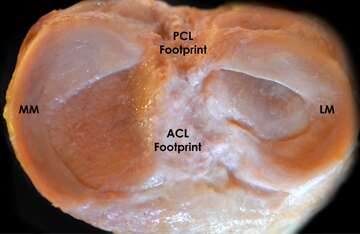 In the current study, we sought to understand how to determine the optimal placement of tunnels in the knee when reconstructing the anterior and posterior cruciate ligaments in conjunction with meniscal root repairs. We used 20 cadaver knees and performed 3D modeling of CT scans to help with this analysis. The results of this study were that tunnel convergence (intersection) on the tibia can be avoided by reorienting the meniscus root repair tunnels parallel to the already created ACL tunnel. We also found that when the ACL and PCL had to both be reconstructed, a simpler meniscal repair procedure with one tunnel, instead of two, may be required to avoid the tunnels intersecting with each other.